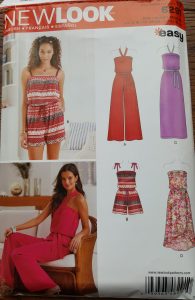 I was going on holiday in June and thought I would make a couple of holiday rompers / dresses to take away with me. I wanted something quite simple and quick to make because I would only where them abroad.

I had a look at a number of patterns but the newlook 6291 looked the easiest and I also liked the jumpsuit, maybe a project for the future, a night out outfit!!

For the straps I cut out 2 strips at 3cm wide x 90cm long and folded in half (3cm x 45cm) stitched down the two sides using a 1/2cm S.A. I now had two strips at 2cm x 45cm. When I wore it on holiday I never used the straps anyway so I will leave those off next time.

The construction was easy enough apart from the shorts description, I was confused. I followed the instructions, sewing the fronts and backs together at the side seams and crotch, well I thought I had, when I removed them from the sewing machine and held them up I couldn’t work out why they were not hanging correctly. They were all twisted and then I realised that the back of the shorts were upside down (crotch at the waistline) Doh!!!! Seam ripper was my best friend. I unpicked them and carefully sewed them together again 🙂 I will definitely construct the shorts differently next time.

The elastic was a bit of a struggle to get through but I didn’t have an elastic guide, glide threader (mouthful!!) and I did sew the bias binding a little tight.

I added pockets to both the romper & dress. For the hem I thought I would turn under twice and top stitch because they are only for the beach.

I thought I didn’t like the romper on me at all so I just wore it around the villa but while I was relaxing in the sun I thought I would turn up the shorts a little so I didn’t get stupid tan lines. When I went back in I caught a glimpse of myself in the mirror and I was surprised how much of a difference it made, much  better, I liked the romper again and wore it to the beach. 🙂

Dress was a lot easier but I did learn a lot from sewing the romper!!

Notes for next time:

I would make them again with the above amendments.